Simi Valley's ITS aims to make business easier for its clients 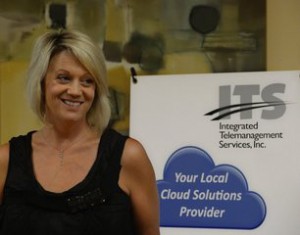 Photos by CHUCK KIRMAN/THE STAR Sharon Woods is president and CEO of Integrated Telemanagement Services, Inc. The company provides IT and telephone equipment and services to small-and medium-sized businesses.

SIMI VALLEY, Calif. - Having Simi Valley-based ITS manage telephone and Internet service means the company’s clients can focus on their core businesses and growing their companies.

So, while ITS started with and retains the corporate name of Integrated Telemanagement Services Inc., the company added a new tag line to highlight its 25th year: “Integrated Technology Simplified.” 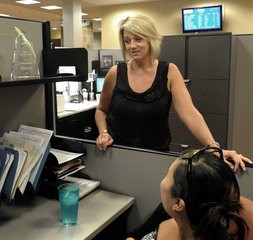 Sharon Woods, ITS president, chief executive officer and owner, was one of the first employees of the company back when it started in 1990 selling telephone service to companies, helping them consolidate multiple bills and creating one single point of contact to set service up and handle any problems. “Anything that they needed, we were their one point of contact,” Woods said. “We still really today do the same thing.”

Armstrong Garden Centers, based in Glendale, has been an ITS client for more than 10 years. The company tried to manage its telecommunications internally, but there were too many people to call when something went wrong and too many invoices to process, said David Weisman, vice president and chief financial officer.

ITS started with providing phone service, he said. Then it helped the company with Internet connections, followed by transferring over to Voice over Internet Protocol. It makes invoice processing a lot easier with a single bill, he said, and troubleshooting easier as well.

“When things aren’t going well, it’s incredibly simple to email one contact,” he said, adding later, “It allows us to run our business as opposed to focusing on how the phone system’s going to work.”

ITS handles 35 locations on the West Coast for Armstrong Garden Centers and 16 on the East Coast, with that number expected to grow. Weisman said Armstrong acquired Pike Nurseries in Atlanta in 2008 and has been slowly bringing ITS in to manage Pike’s needs as existing contracts expire.

Though ITS focuses on small- and medium-sized businesses, ranging from those with a single location to those with multiple locations, a sweet spot for the company is helping businesses with multiple locations and those growing into new areas. ITS not only helps the companies make the right decisions on telephone and Internet service but also can scope out new areas for connectivity — something critical if a client is considering several different locations.

Miramar Eye Specialists Medical Group has grown from a single company with three locations when it first started working with ITS in 2002 to five companies with 10 locations including medical groups and surgery centers in Ventura County. ITS has been a key player in supporting that growth, said Desi Callaway, Miramar chief executive officer.

Callaway said ITS does analysis on any new practice Miramar purchases and gets them switched over to Miramar’s system. When she looks for a new location, the feedback from ITS is crucial in determining if the location has the right infrastructure before she signs a lease, she said.

She relies on ITS to keep her up to date on new services and options. Callaway said working with ITS resulted in switching Miramar over to VoIP, which she estimates lowered phone bills from about $12,000 a month to about $9,000.

“They’re really an extension of the company,” she said. “Anytime we have any trouble with our phones, we call them immediately.”

Woods, who became sole owner of ITS in 2004 when the founders retired, talks about how ITS has grown in the context of the industry. 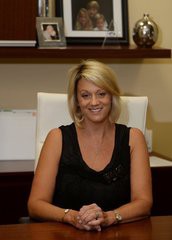 Photos by CHUCK KIRMAN/THE STAR Sharon Woods, President and CEO of Integrated Telemanagement Services, Inc., sits at her desk. The company provides IT and telephone equipment and services to small-and medium-sized businesses.

The company started in Glendale in 1990 and moved into 14 markets by 1995, serving businesses from Los Angeles to San Luis Obispo counties. The company provided full telecommunications services and grew into its niche of serving customers with personal attention.

Deregulation in 1996 led to more competition and more consumer choice. The company shifted from a Single Service Provider, to a Competitive Local Exchange Carrier. That change in designation meant the company could now sell anywhere in California.

The next changes came from technology.

“By 2002, it was very obvious to us if we didn’t get into the data world and only stayed in the voice world, we would be leaving a lot of revenue on the table,” Woods said.

That shift meant moving into selling equipment, such as servers and routers, in addition to connectivity.

In the coming years, ITS expanded phone service, data and moved into VoIP. The next leading edge was cloud applications — hosting client data off-site so clients didn’t have to invest in equipment and could access their data across multiple devices.

Woods said ITS will continue to focus on developing cloud and network services and expects about 25 percent growth in the next five years. Most of that growth will come from new clients, she said.

Woods said the industry continues to change, with data, once an expensive addition, now becoming a commodity, and the same thing happening with VoIP.

Those changes mean revenue from existing customers decreases as prices go down. That’s why new business relationships are so important — and why the company’s reputation for building those relationships is vital.

Chris Wilds, human resources and office manager for Vortech Engineering in Oxnard, said she knows she always can reach someone with ITS when there’s a problem.

“It’s really nice to be able to call up somebody, say ‘This is our problem. This is happening,’ and they just take over, and I can go on with my work,” she said.

ITS helped Vortech Engineering put in a new phone system in 2010 and has managed the company’s service since then.

“I’ve always had good relationships with all of them,” she said. “They’re very friendly, very cooperative and very helpful. ... You don’t feel you’re just another customer. They take care of you.”